History Of The Crystal Bay Hotel

On November 24, 2014, the Hotel was added to the National Register of Historic Places. 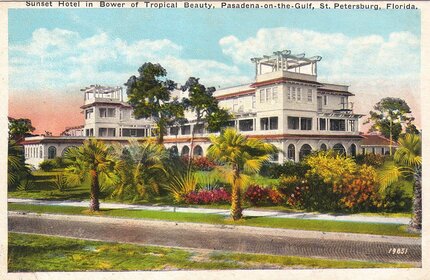 The Sunset Hotel is located west of downtown St. Petersburg, Florida on Central Avenue, the east-west thoroughfare spanning the width of the city.  It overlooks Sunset Park and Boca Ciega Bay at the gateway of the Treasure Island Causeway which leads to the barrier islands and distinctive individual beach communities of Pinellas County.   At the time of its construction in 1915, the area was sparsely inhabited with a few scattered residences. The former Sunset Hotel is now surrounded by single-family homes with retail shops and offices extending east along Central Avenue.
​
The historic Sunset Hotel is a monument of a thriving St. Petersburg past and once hosted celebrities like Marilyn Monroe, Babe Ruth, Glen Miller, Robert Kennedy and many other acclaimed individuals who frequently stayed here. Standing three-stories high, the hotel was recognized for its glamorous ballroom, dining room, lounges, elegant suites and services. 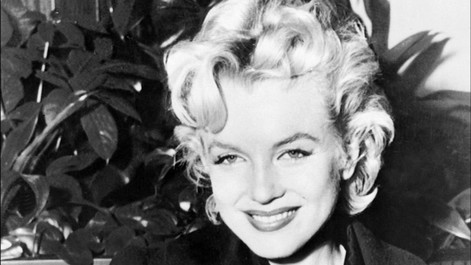 The hotel opened as the Sunset Apartment Hotel for its first season in 1916 with rates for the entire winter season ranging from $250 to $650.  It was the first hotel built beyond walking distance of downtown. The proximity of the Jungle golf course and direct access from downtown via the trolley proved a boom to the hotel. Providing approximately 35 apartments, the building served as a promotional tool to house prospective buyers interested in purchasing lots in the Davista and Jungle subdivisions. “The building, containing about 35 apartments, commands a splendid view of Boca Ciega Bay.”
Following the outbreak of World War I, the real estate market slowed and depression ensued.  By 1918, the St. Petersburg Investment Company declared bankruptcy, and the Sunset Hotel was purchased by Edward E. Hanna in 1919 at an auction for almost $30,000.  With the onset of the Florida land boom in the early 1920s, the Sunset Hotel underwent a period of expansion.  Within the first few years after construction, a one-story porch on the west wing was enclosed and enlarged to form a dining room.  In an effort to compete with the newer hotels, the Sunset Inn expanded with a three-story addition to the west wing in 1926, which also enlarged the dining room. 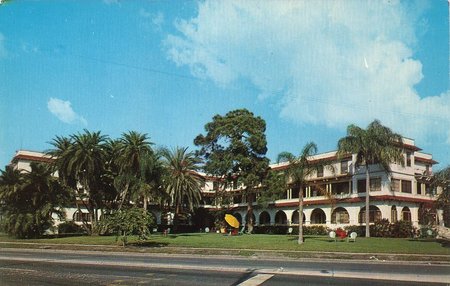 The 1939 completion of the Treasure Island Causeway opened the Gulf beaches to increased traffic which initially improved the visibility of the Sunset Hotel. Although tourism had rebounded to some extent by 1940, the activation of the military, rationing, and travel restrictions during World War II severely curtailed St. Petersburg’s tourism based economy.  The Great Depression and governmental restrictions during the war led to a housing shortage following World War 11. Many hotels and boarding houses were again filled with tourists and new residents awaiting the construction of new homes.  As development spread westward, motels along the west coast drew new residents and tourists away from downtown St. Petersburg.  Located along one of the primary routes to the Gulf beaches, the Sunset Hotel prospered in the late 1940s and 1950s.  The Sunset Hotel in a 1955 advertisement touted:
In 1958, owner Leland Thorp decided to open the Sunset Hotel as a year-round residential property.  The building was remodeled, which included enclosing some of the open porches, to accommodate the year-round occupancy. With the development of the coastal beaches during the 1960s and 1970s, mainland hotels suffered and declined. The Sunset Hotel was converted to a retirement hotel, remodeled and then sold several times. Throughout the last 10 years under successive ownership, renovation efforts have taken place. The hotel then sat vacant in disrepair, a victim of the economy and a sad reminder of its once former splendor.